Activists Close US Foundations in Gaza in Response to NC Killings 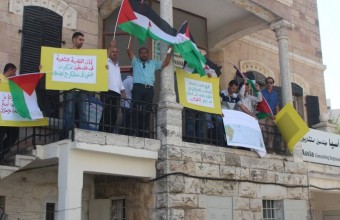 A number of US foundations in Gaza, this morning, closed their gates before an activist movement which stood in protest of the killing of two Palestinian girls in North Carolina, on February 10.PNN reports that, according to local sources, a group of youngsters declared their willingness to close down a number of US associations in Gaza for two hours, to highlight the killings of two Palestinians in the US.

Activists also announced their willingness to prevent people from entering the associations, as a message expressing their outrage over the media blackout regarding the case.

All three were involved in humanitarian aid programs. Police charged the couple’s neighbor with murder. They say initial findings indicate a dispute over parking prompted the shooting, but they are looking into whether Hicks was motivated by hatred toward the victims because they were Muslim.