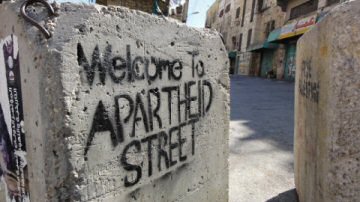 In the daily reality of Hebron, its residents do not only remember the 1994 Ibrahimi mosque massacre, but live it and its consequences each and every day.Palestinians throughout the West Bank and particularly in the city of Hebron are in high gear preparing for Hebron Week, a week of protests and activities in commemoration of the Ibrahimi Mosque massacre, when an Israeli settler entered Hebron’s Ibrahimi mosque on 25 February 1994, in the middle of the month of Ramadan, murdering 29 Palestinians and wounding over one hundred.

In addition to its commemorative value, Hebron week is a protest against the numerous Israeli decisions and procedures implemented since the murder, decisions which further oppress the local Palestinian residents of the city. These include division of the Ibrahimi mosque into two – a section for Muslims and another for Jews; establishment of three checkpoints near the mosque’s western gate, through which Palestinians must pass; and closure of the main Shuhada Street to Palestinians and imposition of growing restrictions on commerce, worship and movement freedoms in Hebron’s city center.

This was the first time ever that the Ibrahimi mosque was divided into two sections. Over 10,000 Palestinian residents in Hebron live to the East of the mosque, so daily they must pass through at least one of the three checkpoints on their way to work, school and the shops.

Hebron was further divided in 1997 through an agreement between the Palestinian Authority (PA) and Israel, under which 50,000 Palestinians live in the area under full Israeli control. Their lives are miserable because of the some 500 settlers who live in five settlements in this area. Many of the settlers enjoy attacking Palestinians and denying their rights through, amongst other actions, attacks on homes and shops, stoning people in the street and confiscation of land and homes. These aggressions are committed with full cooperation of the Israeli army or with its complicity through silence.

In such a reality, the residents of Hebron do not only remember the 1994 Ibrahimi mosque massacre, but live it and its consequences each and every day.

Each year the local grassroots movements and committees in Hebron commemorate the Ibrahimi mosque massacre through demonstrations and other activities which express their resistance and refusal of Israeli policies. These actions are conducted in cooperation with internationals on both the individual and organisational levels, and also with Israelis who oppose Israeli policy and participate each year in Hebron Week activities.

“This Hebron Week is special as the situation in the city has been extremely difficult this past year” says Anan Da’na, a member of the Hebron Defense Committee and resident of Hebron’s downtown. “We’ve witnessed serious attacks by settlers and an escalation in their taking over of Palestinian-owned homes and expanding the settlements.” Da’na adds that “It is so important that numerous activists and organisations from Hebron, abroad and Israel will participate in the big demonstration on February 20. We are also inviting ambassadors and consuls to join the demonstration, or come to Hebron during our week of activities.”

A collective prayer is planned for Tuesday 24 February in the Ibrahimi mosque, to which many from throughout Palestine will come in solidarity with Hebron.

Looking beyond Hebron Week, Da’na states that the city’s activists and social movements “will push the Palestinian leadership to treat what is happening in Hebron as war crimes and to raise them in international bodies such as the International Criminal Court”.

More stories and relevant links at the Alternative Information Center.