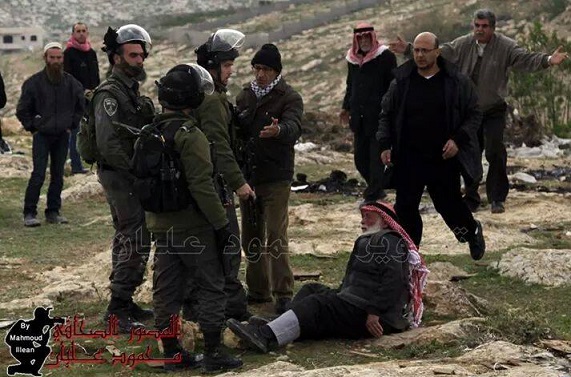 A group of Israeli fanatics accompanied by a number of soldiers, invaded on Tuesday the “Jerusalem Gate” (Bab al-Quds) protest village, in Abu Dis town, east of occupied Jerusalem, and demolished it for the eight consecutive time.Nonviolent resistance activist Hani Halabiyya stated that a group of Israeli fanatics of a number of illegal Israeli colonies stormed the protest village, and started removing the brick and wooden rooms.

Israeli extremists attacked the residents and pushed an elderly man onto the ground while the soldiers were trying to remove the Palestinians instead of forcing fanatics away.

The army declared the entire area a closed military zone, preventing the Palestinians and activists, and even the media, from entering it.

Halabiyya said this is the eighth time the soldiers attack and demolish the village that was installed to protest Israel’s illegal colonialist activities, and its plans to remove the Bedouins from the area to relocate them in other areas.

The activists conduct their legitimate popular resistance to express their rejection to the E1 Israeli colonialist plan that aims at linking east Jerusalem colonies with Maali Adumim, and creating a network of settlement roads that would completely block Palestinian geographic contiguity, and isolate entire Palestinian communities.