Six Palestinians Kidnapped In West Bank, One In Gaza 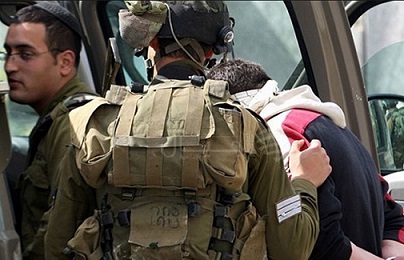 Soldiers also invaded Surif nearby town, and kidnapped Yousef Mohammad Jubran, 20 years of age, after storming and ransacking his home.

Coordinator of the Popular Committee against the Wall and Settlement in Beit Ummar town, Mohammad ‘Awad, said undercover Israeli soldiers, driving a Palestinian car, infiltrated into the town, before several military vehicles invaded it.

The soldiers then surrounded the home of resident Mohammad ‘Ali Ekhlayyel, stormed and ransacked its property, and kidnapped his son, Odai, 27 years of age.
The soldiers also confiscated the Laptop of Odai’s brother, and searched a car causing excessive damage.

In addition, soldiers invaded several neighborhoods in Hebron city, and installed roadblocks on its northern entrance in addition to the main entrances of Sa’ir and Halhoul town.

Troops then stopped and searched dozens of cars, and interrogated the passengers while inspecting their ID cards.
In Bethlehem, soldiers invaded the Jabal al-Mawaleh area in the center of the city, stormed and searched the home of Yahia Saleh Jado, 29, and kidnapped him.

On Monday evening, dozens of settlers accompanied by Israeli military vehicles invaded the al-Hafeera area, southwest of Jenin, and assaulted several Palestinians while shouting and cursing at them.

Also on Monday evening, soldiers invaded ‘Aseera ash-Shemaliyya town, northwest of the northern West Bank city of Nablus, and kidnapped two Palestinians. The two have been identified as Adham Sawalma and Mohammad Jawabra.

In related news, soldiers kidnapped, on Monday evening, a Palestinian man as he was trying to cross the Erez Israeli terminal on his way back home to Gaza.

Last week, Israeli soldiers kidnapped eight Palestinian merchants on the Eretz terminal, and took them to a number of interrogation centers.