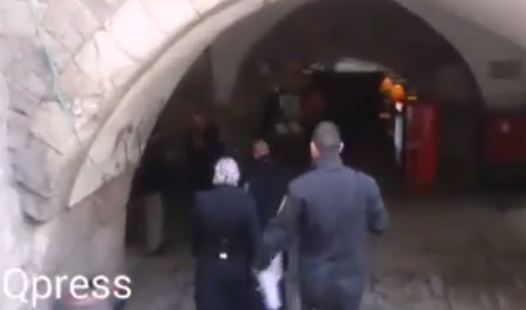 Israeli soldiers kidnapped, Tuesday, a Palestinian woman from Jerusalem while she was leaving the Al-Aqsa Mosque, through the Bab an-Nather Gate, and took her to an interrogation center in the city. Two Children, 12 and 10, handed interrogation notices.The attack took place after a number of Israeli fanatics, accompanied by police officers and soldiers, invaded the yards of the mosque, and conducted provocative acts against the Palestinians.

Eyewitnesses said the extremists invaded the mosque yards through the al-Magharba Gate.

On Monday, the Police abducted four Palestinian women while leaving the Al-Aqsa Mosque, released them after hours of interrogation, and issued orders preventing them from entering the mosque for two weeks.

In related news, Israeli bulldozers demolished, on Tuesday morning, a wall surrounding a Palestinian home in at-Tour, overlooking Jerusalem’s Old City, allegedly for being built without a permit in a “Green Zone.’

The owner, Mohammad Abu al-Hawa, never received prior notice, yet the soldiers demolished his wall.

In addition, soldiers invaded, on Tuesday at dawn, the home of resident Arafat Abu Sbeitan, in at-Tour neighborhood overlooking the Old City, and handed his two children military orders for interrogation.

The father said the soldiers handed the warrants, ordering his children Mohammad, 12 and Ibrahim, 10 years of age, to head to the al-Maskobiyya interrogation center for interrogation.

In addition, a number of Israeli military vehicles invaded Marda village, north of the central West Bank city of Salfit, and kidnapped a Palestinian identified as Ezzeddin Khuffash, 20, after storming his family home.