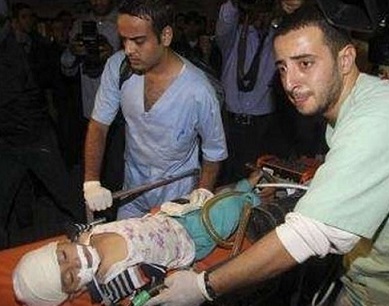 Palestinian medical sources have reported, on Tuesday evening, that three children were injured when an explosive object dropped by the army during the offensive on Gaza last summer, detonated near them in northern Gaza. The sources said the children suffered very serious injuries, and were moved to the Kamal ‘Adwan Hospital in Beit Lahia, in the northern part of the Gaza Strip.

The incident took place near the al-Huda mosque, in the Tuam area.

The children were playing when they apparently found the object that detonated near them causing serious injuries.

During the Israeli aggression on Gaza in the summer of 2014, the army dropped thousands of missiles and shells into different parts of the Gaza Strip, while many of those shells did not explode upon impact.