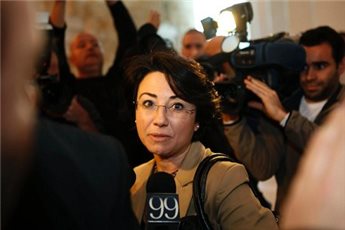 The Israeli Supreme Court, on Wednesday, overruled a ban on a member of Knesset from Israel’s Palestinian community, as well as another on an extreme right-wing Jewish activist, from running in next month’s election, an official said.Last week, according to AFP, the Central Elections Committee barred MK Hanin Zoabi, known for her staunch criticism of Israel’s right-wing government, deeming her to be ‘hostile to the Jewish state’.

It also excluded Baruch Marzel for allegations of racism.

‘She can be a candidate,’ a spokesman for the courts administration said of Zoabi. ‘So can he (Marzel).’

The exclusion orders required the Supreme Court’s ratification in order to take effect, and their rejection by the tribunal had been widely expected.

The CEC had barred Zoabi from standing in 2013, but this was also nullified.

Zoabi rejects the concept of Israel as a ‘Jewish’ state and supports a single country in which Jews and Arabs have equal rights.

Arab-Israeli legal rights group ‘Adalah’ said that the court’s decision demonstrates the ‘improper motives’ of the CEC, which it says ‘portrays Arab (MPs) as supporters of terrorism’.

CEC decisions ‘are not only harming Arab political parties and candidates, but are also violating the basic rights of Arab citizens of Israel, namely their rights to political participation, freedom of expression, equality and dignity,’ it was added in a statement.

As for Marzel, a follower of the assassinated racist rabbi Meir Kahane, his attorney said that slurs against migrants and Arabs attributed to him were either never made or were misunderstood.

Last month, Israel’s four Arab parties decided to fight the March 17 election as a single block. Zoabi is seventh on a united list, which opinion polls suggest could win between 10 and 13 seats in the 120-member Knesset.

Some 1.3 million Palestinian citizens live inside the official borders of Israel, and compose about 20 percent of the population.

They are the descendents of 160,000 people who remained on their land during the mass displacement of the remaining Palestinian population, during the creation of the Israeli state in 1948.