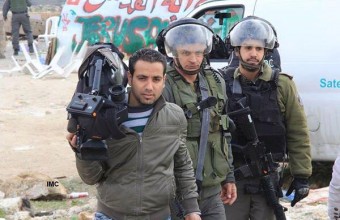 Activists participating in the symbolic village known as the ‘Jerusalem Gate’ were detained by Israeli forces on Tuesday, and will be brought before a military court on Thursday afternoon. Israeli forces physically assaulted the activists whilst raiding the tent yesterday, the PNN reports.

Israeli forces, on Monday, attacked and demolished the protest tent for the eighth time in a row, after being repeatedly rebuilt by activists.

Five people were detained, in all, including four Palestinians and one international volunteer.

PNN further notes that Popular Resistance activists and the people of Jerusalem, on Tuesday, February 3, were able to construct a number of tents, calling them ‘Jerusalem Gate’.

These tents were constructed in protest against the occupation and colonial settler policies which are practiced on Palestinian lands in occupied East Jerusalem, namely Abu Dies and Al Eizarieh, which are threatened with confiscation. Israeli forces announced that they would demolish these tents hours after their construction.

In the early morning hours of February 4, 2015, only a day after the establishment of the Jerusalem Gate, the area was raided by Israeli army bulldozers. The army used gas bombs and stun grenades against the activists. Soldiers demolished the tents and the iron structure which the activists used to sleep in. After the brutal assault on protesters and activists, they returned immediately to the area and rebuilt the tents, including those remaining.

They declared that the battle against the occupation will continue until the Israeli schemes are foiled.

Popular Resistance activists, with the residents of the threatened land in Al Eizarieh and Abu Dis, will continue to construct these with the aim of expressing their rejection of and the struggle against the policies of the Israeli army, in addition to its decisions which are leading to the confiscation of the Palestinian lands and the expulsion of Bedouin communities in occupied East Jerusalem.