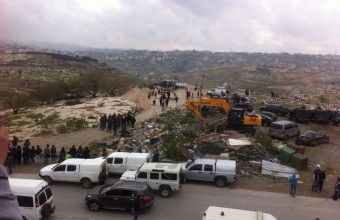 Palestinian activists rebuilt the Jerusalem Gate protest camp in the central occupied West Bank, on Wednesday, for the ninth time in just over two weeks following another raid and demolition by the Israeli military.According to Ma’an News Agency, activists said they will insist on occupying the land in the Khallet al-Raheb area, near Abu Dis, despite the constant demolitions, repression and detentions by Israeli forces, in order to thwart Israeli plans to displace thousands of Palestinian Bedouin families from their homes.

Spokesperson for local popular resistance committees, Hani Halabiya, told Ma’an that activists set up the tents in the protest camp as soon as Israeli bulldozers left, on Wednesday afternoon.

He said that Israeli forces raided the area as the activists rebuilt, surrounding the camp and taking pictures of activists as they were setting up tents.

Halabiya added that activists will remain in the Jerusalem Gate or ‘Gateway to Jerusalem’ (Bawwabat al-Quds) until Israeli plans to displace Palestinian Bedouins are cancelled, calling upon Palestinians and activists to join the protests in the camp.

Activists said that the ‘plan to displace Bedouins is a demographic bomb that Israel is using to empty Palestinian lands of its original residents, steal their properties, and the rights to return to the original villages that they were displaced from’.