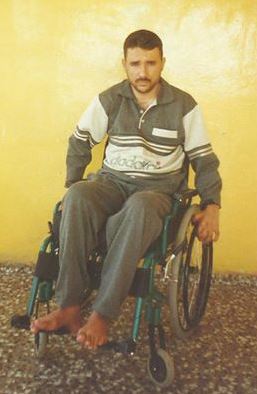 Israeli soldiers released, on Thursday at night, a paralyzed Palestinian detainee from Za’tara village, east of the West Bank city of Bethlehem.The Mawwal Radio in Bethlehem said the released wheelchair-bound detainee has been identified as ‘Adnan Abdullah Mohsin, 41 years of age.

The soldiers kidnapped Mohsin eight months ago when the army conducted an extensive invasion into the Hebron district, and various West Bank areas, kidnapped hundreds of Palestinians and ransacked hundreds of homes after three Israeli settlers were reportedly kidnapped, and were later found killed near Hebron.

Mohsin, a married father of three children, was taken prisoner at 1:30 after midnight on June 19 2014, after dozens of soldiers surrounded the apartment building where he lives with his family, and invaded it.

The soldiers wanted to kidnap him by placing him on a stretcher without taking his wheelchair to accompany him, but his father insisted that the soldiers need to keep his son’s wheelchair with him due to his paralysis.

The soldiers handcuffed ‘Adnan and blindfolded him, an issue that prompted his father to object, telling them his son is completely parlayed.

“Do you really need to handcuff a man who cannot walk, and cannot even stand?” the father told the soldiers, “Are you worried he would start walking and run away!” A soldier then responded, “This is a security measure that must be implemented.”

After the soldiers kidnapped him, he was placed in a small inaccessible room in Etzion; he fell off his wheelchair and suffered various injuries to his bad, arms and legs.

One day after he was held in Etzion, the detainee was moved to the ‘Ofer Israeli prison.

He received an Administrative Detention order for four months, without charges or trial; the order was renewed another time.

He spent most of his months in detention in the Ramla Prison Clinic that lacks basic supplies, equipment and specialized physicians.

It is worth mentioning that ‘Adan was previously kidnapped and imprisoned for several months both in 1990 and 1997.

His paralysis was due to an accident in 2001, after he fell while working at a construction site; his spine was severed resulting in paraplegia.

He suffered from various health complications, including respiratory issues, blood clots, spasticity and complications in his bowels, bladder and urinary canal.