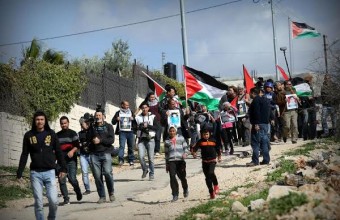 Yesterday, February 20, 2015, marked the 10th anniversary of the weekly demonstrations against the Israeli Apartheid Wall in the West Bank village of Bil’in. There have been more than 500 Friday protests since Palestinians, usually accompanied by international and Israeli solidarity activists, began marching towards the barrier that divides their village.

Dozens of participants suffered from tear gas inhalation during the march today after Israeli forces attacked them, just before they arrived to the old route of the wall. The soldiers used jeeps to chase demonstrators towards the village and fired a lot of tear gas canisters and rubber bullets at them. According to the PNN, some members of families who live nearby also suffered from tear gas inhalation.

Despite the cruel weather, a lively demonstration headed from the center of the village to the wall. Participants raised Palestinian flags, banners and pictures of children who are detained in Israeli jails.

Palestinians, international and Israeli solidarity activists chanted slogans calling for the demolition of the wall, freedom for Palestine, and for prisoners in Israeli jails.

A big main demonstration was planned for yesterday’s 10th anniversary, but, due to the bad weather, it was postponed till next Friday, February 27, so that everyone will be able to participate. 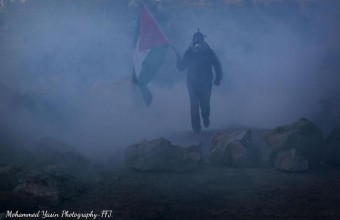