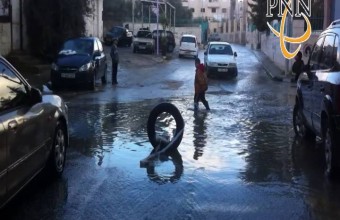 Aida refugee camp, north Bethlehem city, has drowned after the Gilo settlement opened its barrages, throwing all excess rain and melted snow water onto the camp. Meanwhile, hundreds of Palestinians were evacuated from their homes, Sunday morning, after Israeli authorities opened a number of dams near the border, flooding the Gaza Valley, in the wake of a severe winter storm.Aida camp is adjacent to a portion of the Israeli apartheid wall, which is backed by the Gilo settlement, to the northwest, that opened its barrages and flooded the homes of refugees.

Sami Hmedan, in charge of water pumps in the camp, said that Israeli occupation authorities opened the barrage water with disregard to the Palestinians and without any official concerns.

The water has accumulated in the street and the main electricity station of the camp and, so, has hindered the life and movement there, according to the PNN.

The residents said that they have received numerous promises by officials to solve the problem and have made different arrangements. However, these promises have so fruited nothing.

Head of Lajee center, Salah Ajarma, said that an appeal was presented to the Bethlehem municipality and the water department, while awaiting action.

Ajarma added that the department of public works promised to repair the area, pointing out its danger on the homes and children’s lives.

Aida camp is constantly raided by Israeli soldiers, with their successive assaults and kidnapping campaigns, while being forced to tolerate narrow space, overpopulated homes and unemployment, to begin with, in addition to regular sewage and flooding problems.

Meanwhile, in the Gaza Strip, the Ministry of Interior has stated that civil defense services and teams from the Ministry of Public Works had evacuated more than 80 families from both sides of the Gaza Valley (Wadi Gaza), after their homes flooded as water levels reached more than three meters.

The storm displaced dozens and caused hardship for tens of thousands, including many of the approximately 110,000 Palestinians left homeless by Israel’s assault, last summer.

The suffering in Gaza is compounded by the fact that Israel has maintained a complete siege over the region for the last eight years, severely limiting electricity and the availability of fuel for generators. It has also prevented the displaced from rebuilding their homes, as construction materials are largely banned from entering.

Gaza civil defense services spokesman Muhammad al-Midana warned that further harm could be caused if Israel opens up more dams in the area, noting that water is currently flowing at a high speed from the Israel border through the valley and into the Mediterranean sea.

Evacuated families have been sent to shelters sponsored by UNRWA, the UN agency for Palestinian refugees, in al-Bureij refugee camp and in al-Zahra neighborhood, in the central Gaza Strip.

The Gaza Valley (Wadi Gaza) is a wetland located in the central Gaza Strip between al-Nuseirat refugee camp and al-Moghraqa. It is called HaBesor in Hebrew, and it flows from two streams — one whose source runs from near Beersheba, the other from near Hebron.

Israeli dams on the river which collect rainwater have dried up the wetlands inside Gaza, and destroyed the only source of surface water in the area.

Locals have continued to use it to dispose of their waste for lack of other ways to do so, however, creating an environmental hazard.

See also: Half of Gaza Beaches Unfit for Swimming

This is not the first time Israeli authorities have opened the Gaza Valley dams, Ma’an further reports.

In Dec. 2013, Israeli authorities also opened the dams amid heavy flooding in the Gaza Strip. The resulting floods damaged dozens of homes and forces many families in the area from their homes.

In 2010, the dams were opened as well, forcing 100 families from their homes. At the time, civil defense services said that they had managed to save seven people who had been at risk of drowning.

02/20/15 Palestine Shuts Down Amid Winter Storm 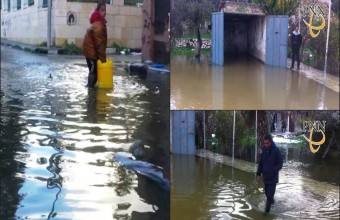