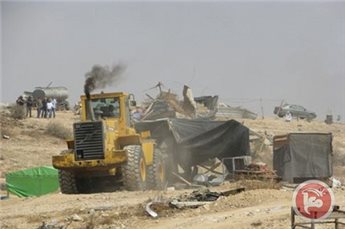 Israeli authorities on Sunday demolished four homes belonging to Palestinian Bedouins near the town of Hurah, in the Negev Desert, southern Israel.Bulldozers appeared in the village of Sawah, east of Hurah, on Sunday morning, accompanied by a large number of police officers, who proceeded to demolish the homes soon after arrival.

‘We are now trying to evacuate furniture and clothes from the houses in the short time limit the Israeli forces have given us,’ one of the residents Salamah al-Qassasi told Ma’an News Agency.

The Israeli Ministry of Interior apparently ordered the demolition about a month ago. Residents appealed the decision in court, but the court then demanded that they provide a proof of ownership, which they did not have.

Bedouins in Israel live in 45 unrecognized village scattered primarily in the region between Beersheba and Arad. They are the remnants of the Bedouin population that lived across the Negev Desert until 1948, when 90 percent were expelled by Israel and the remainder confined to a closed reservation.

In 2013, authorities said that the homes of the 1,500 residents of the village were to be demolished because the area had been converted into a closed military zone.

Since that time, residents have fought court rulings and prevented the village’s wholesale demolition so far. Authorities have, however, demolished individual homes.

The demolitions are part of an ongoing campaign by Israeli planning and construction committees against the unrecognized Bedouin villages in Negev desert, where between 70-90,000 people live.

Authorities deny them access to basic services and infrastructure, such as electricity and running water, and refuse to place them under municipal jurisdiction, keeping them stuck in areas previously declared ‘state land’ despite their residence there.

Ma’an further reports that, over the past few weeks, demolition warrants have been posted on the doors of hundreds of houses in the villages of Tawil, Abu Jaroul, Wadi al-Niam, Awajan, al-Laqiyya, al-Qurein, and al-Sira.

The campaign, according to Bedouin residents, appears to be part of the right-wing Israeli government’s efforts to win votes in the upcoming elections by quietly reactivating the notorious Prawer Plan on the arrangement of Bedouin settlement in Negev.

Although it was cancelled in 2013, if it had been implemented the Prawer Plan would have involved the destruction of the Bedouin villages and their confinement to cities against their will.

Israeli restrictions on movement — in order to build Jewish settlements on Palestinian lands previously used by Bedouins or through the construction of the Separation Wall to cut through the West Bank — have severely curtailed Bedouins’ traditional nomadism.