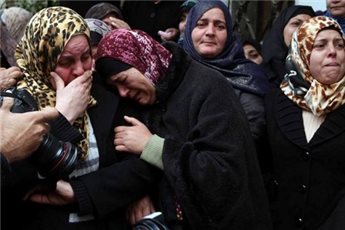 Autopsy results for a young Palestinian killed by Israeli forces near Bethlehem, early Tuesday, show that he was shot in the upper body at close range, a forensic expert told Ma’an News Agency.Sabri al-Aloul said that the autopsy results show that 19-year-old Jihad al-Jaafari bled to death after being hit with an M16 bullet that penetrated his body through the left shoulder and struck his lungs, before exiting and causing severe bleeding in his arteries and around his spine.

The killing was ‘similar to an execution’ because he was shot from very close range, al-Aloul said.

The autopsy was performed between 10:45 a.m. and 12:30 p.m. and adhered to international standards, he added.

He further stated that the autopsy was significant, given that the report could be used to hold Israel accountable in international courts.

Al-Jafaari’s father, Shehada, had called for the autopsy in order to document what he described as Israeli crimes and violations against Palestinians.