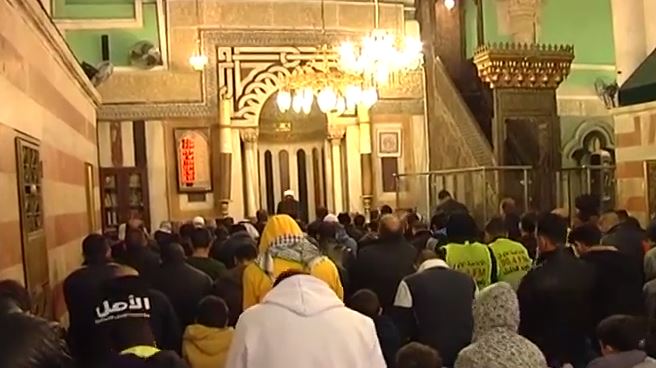 Hundreds of Palestinians marked, Wednesday, the 21st anniversary of the Ibrahimi Mosque massacre that led to the death of 29 Palestinians, and the injury of around 200.
Among the victims were many children and elderly; some of the wounded suffered permanent disabilities.The Palestinians in the city started the ceremony with prayers in the mosque, and demanded protection to them, homes and property, and their holy sites.

They said Israeli fanatics, illegally living in the city, are ongoing with their violations and assaults, while enjoying protection from the army.

The massacres was carried out by American-born Baruch Goldstein, who was also a physician; Israel claimed he was “mentally unstable”.

‘Adel Edris, one of the survivors of the attack, told the Wattan News Agency that, as the Muslim worshipers were kneeling, they heard dozens of rounds of live ammunition fired towards them from a gunman who was standing all the way behind them.

“The physician, who was also an army officer, entered through the ‘Ishaqiyya Gate’ of the Ibrahim Mosque, and started shooting,” Edris said, “My brother, Salim, was killed, my other brother and many relatives were injured.”

The Khatib of the al-Ibrahimi Mosque Hatem al-Bakri said that, after the massacre, Israel used the situation to divide the mosque, and emptied all nearby Palestinian homes after forcing the families out, so that it can bring more Israeli colonizers to replace the Palestinians.

“Israel also deliberately shut down around 3000 stores after the massacre,” he added, “It divided the mosque, has been trying to keep us out, and still intends to fully control it.”