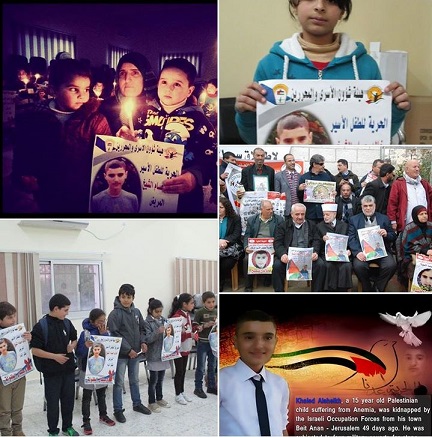 The Israeli military court in the Ofer base and detention center, near the central West Bank city of Ramallah, sentenced on Wednesday child detainee, Khaled Husam Sheikh, 14 years of age, to four months imprisonment, and 2000NIS fine, his family said.The family stated the military court also sentenced the child to a six-month suspended sentence that will remain in effect for five years.

Sheikh is from Beit ‘Anan, in occupied Jerusalem; he was kidnapped by the soldiers next to his family home, on December 25, 2014, and is currently held in ‘Ofer.

Sheikh’s lawyer Akram Samara told the family that the chief military prosecutor headed the court session, in a move that is unusual, especially since the head prosecutor only resides in exceptional cases.

It is worth mentioning that the army detained the child’s father for talking to the media, exposing the Israeli violations against his detained son, and for organizing media and social solidarity campaigns.

Under the court ruling, Khaled will remain imprisoned until April 25 2015, after deducting time served.

The father, along with various human rights groups, legal organizations, and solidarity campaigns, called for Khaled’s immediate release, and said solidarity activities will never cease until his freedom.

They added that Israel must be obliged to release all detained Palestinian children, stop its violations of International Law, and must end its ongoing and escalating violations against all Palestinians.

The father said the campaign would continue, especially since Israel is denying the detained child access to his much-needed medications, as he suffers from Anemia and several health complications.

The child’s lawyer filed all medical reports to the Israeli military court, and demanded the court to provide the needed medical care.