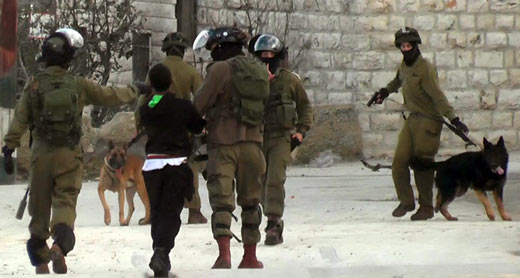 A video posted on Facebook Monday by a right-wing Israeli politician, then quickly removed, showed graphic evidence of what Palestinians have reported to be a common Israeli military practice: using dogs to attack unarmed civilians, including children.In the video leaked by Michael Ben-Ari on his Facebook page, two Israeli soldiers are holding onto a 16-year old boy, and forcing a dog to bite the child while commanding the dog ‘Bite him!’ and saying to the boy, ‘Who’s the coward now?’ in Hebrew.

The incident in question has been identified as a December 23rd 2014 attack by Israeli soldiers who captured the child in a ‘buffer zone’ between Beit Ummar, a town located near Hebron in the southern part of the West Bank, and a nearby Israeli settlement built on land stolen from the Palestinian residents of Beit Ummar.

Before it was removed, the video was copied and spread around the internet. In response, the Israeli military issued a statement saying that the incident was ‘irregular’ and ‘would be investigated’.

But the Israeli Information Center for Human Rights in the Occupied Territories, B’Tselem, has documented numerous occasions on which the Israeli military used dogs as weapons against unarmed Palestinian civilians.

On December 24th, 2014, in fact, B’Tselem posted a report of this particular incident, and video footage of the abduction of 16-year old Hamzeh Abu Hashem. But while the B’Tselem video included a number of disturbing elements, including soldiers chasing down and pinning a 16-year old boy suspected of throwing stones, and an Israeli settler pointing a gun directly at the boy with impunity, the video did not show the actual attack on the boy by the dogs.

But the clip posted by Ben-Ari does show the dogs being used as weapons, in an image reminiscent of the use of dogs by U.S. police in the southern part of the country during the civil rights era using German shepherds to attack protesters.

According to the B’Tselem report about the incident, posted on December 24th 2014, ‘At approximately 2 P.M. on Tuesday, 23 Dec. 2014, a confrontation developed between several dozen Palestinians and soldiers in the Special Security Area (SSA) surrounding the settlement of Carmei Tzur, south of Beit Umar in the West Bank. The area is the site of frequent confrontations between soldiers and Palestinian residents of Beit Umar, whose land was appropriated for the settlement and the SSA.

‘The SSA, which is supposed to serve as a buffer zone that no one but security forces may enter, was established on privately-owned Palestinian land. The owners need to obtain a special permit to reach and cultivate their land, but such permits are issued for only several days a year. In contrast, security forces allow settlers free access to the stolen land.

‘Video filmed by B’Tselem camera volunteer Muhammad ‘Awwad. The footage shows the soldiers with the attack dogs on village land and the arrest of 16-year-old Hamzeh Abu Hashem, but not the attack itself. Further on, soldiers are seen taking the teen into the SSA and locking the gate behind them, after which Palestinians verbally confront them, demanding his release. A settler, probably the settlement’s head of security, is seen cocking his weapon and the soldiers do nothing to stop him.

‘During the confrontation, Palestinians threw stones at soldiers, who responded with use of crowd control weapons. About an hour after the incident began, at around 3 P.M., two soldiers arrived on the spot with two dogs, who were captured on video by B’Tselem volunteer Muhammad ‘Awwad. According to eyewitness reports, one of the dogs (seen lunging forward at the beginning of the footage) attacked and bit one of the Palestinians confronting the soldiers, 16-year-old Hamzeh Abu Hashem. The soldiers then removed the dogs, handcuffed Abu Hashem, and took him to the settlement of Carmei Tzur. From there, he was taken by ambulance to an Israeli hospital. Abu Hashem’s family reported that he was arrested and taken from hospital to Ofer Prison. ‘

Video posted by B’Tselem in December showing the soldiers abducting the boy: