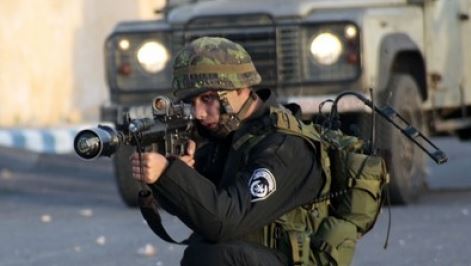 Israeli soldiers invaded the town of Qabatia, south of the northern West Bank city of Jenin, on Tuesday at dawn. During the invasion, the soldiers shot and injured a young man, while scores of residents suffered the effects of tear gas inhalation. Eyewitnesses said clashes took place in the town after several armored Israeli military vehicles invaded it, and that the soldiers fired rounds of live ammunition, gas bombs and concussion grenades.

A young man, identified as Mohammad Saleh Hathnawi, 20 years of age, was shot by a live round in his right leg, and was moved to the Jenin governmental hospital.

Medics provided treatment to scores of residents who suffered the effects of tear gas inhalation while in their own homes.

One of the residents, Noah Fadel Zakarna, was transported to the Khalil Suleiman governmental hospital due to severe respiratory issues after the soldiers fired gas bombs towards his home.

In addition, soldiers invaded the home of Omar Abu Zeid, and his father’s home, ransacking both homes, causing excessive property damage; the soldiers also interrogated the two families for several hours before withdrawing from the town.

Soldiers also invaded al-‘Arqa and Maraka villages, near Jenin, and conducted military training in a number of neighborhoods.