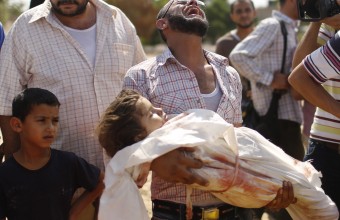 A United Nations envoy, Tuesday, called on Israel to investigate the killing of about 1,563 Palestinian civilians, one third of them children, during the 2014 offensive on Gaza, and to make the findings public.According to the PNN, Makarim Wibisono, a former Indonesian ambassador, issued his first report to the UN Human Rights Council since becoming its special rapporteur on human rights in the Palestinian territories, last June. US Secretary of State John Kerry accused the forum on Monday of being obsessed by allegations of Israeli abuses and said that the United States would defend Israel against efforts to isolate it, Reuters said.

UN sources said that Israel has withdrawn from the committee after accusing the UN of siding with Palestinians.

According to UN Human Rights Committee, some 2,256 Palestinians were killed during the July-August aggression, of whom 1,563 were civilians including 538 children. On the other side, 66 Israeli soldiers and five civilians died.

‘The stark disparity in casualty figures on the two sides … reflects the (skewed) balance of power and the disproportionate cost borne by Palestinian civilians, raising questions as to whether Israel adhered to the international law principles of distinction, proportionality and precautions,’ Wibisono said.

Most civilian victims were ‘not simply bystanders on the street in the wrong place at the wrong time’, he said. ‘Most victims were families killed in missile strikes on their own homes, usually at night.’

He interviewed victims in Amman and Cairo or witnesses on video calls in Gaza, as Israel had not let him go there. A separate report on possible war crimes committed by both sides is to be issued by a UN commission of inquiry soon. Its chairman was forced to step down last month.

Unexploded ordnance still litters Gaza, causing further casualties, he said, with an estimated 7,000 devices needing to be defused. Some 100,000 people remain displaced while 450,000 are disconnected from water mains.

Though verbal condemnation of Israeli abuses continues to surface within the global community, physical intervention from respective military powers has yet to be seen.

Some 500,000 Israeli settlers now occupy the West Bank and East Jerusalem, in contravention of international law.