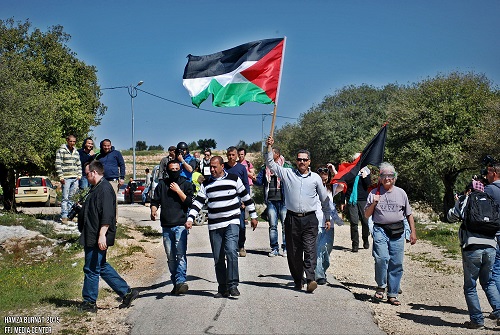 Eyewitnesses said a 17 year old teenager was shot by a live round in his leg, and another was hit by a gas bomb in his arm. Both were moved to a hospital for treatment.

In Ni’lin village nearby village, soldiers attacked protesters with tear gas, causing many too suffer the effects of tear gas inhalation.

In the nearby Nabi Saleh village, Israeli troops fired several, and rubber-coated metal bullets at the villagers as soon as they reached the village entrance.

Moreover, Israeli troops fired tear gas at residential areas causing damage to the houses as some of the tear gas canisters went through the windows inside the villagers’ homes.

In the southern West Bank village of al Ma’sara, Israeli troops attacked the villagers and their supporters at village entrance then forced them back using rifle buts and batons, no injuries were reported.