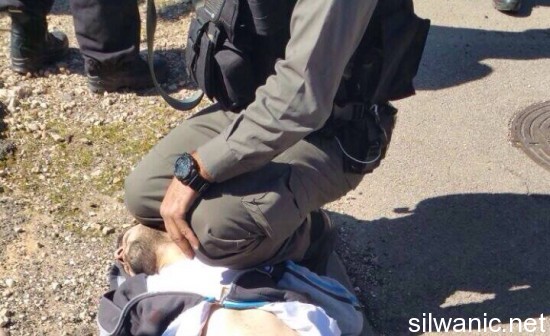 The Wadi Hilweh Information Center (Silwanic) in Silwan, in occupied Jerusalem has reported that a young Palestinian man was shot and seriously injured by Israeli army fire, after the soldiers alleged he deliberately struck some soldiers with his car on Street #1 in Jerusalem.The seriously wounded man has been identified as Mohammad Mahmoud Salaymeh, 22 years of age. Israeli sources said the young man ran-over a group of soldiers, wounding five.

Mohammad is from Ras al-‘Amoud neighborhood in occupied East Jerusalem.

A lawyer with the Ad-Dameer Prisoner Support and Human Rights Association said Mohammad, who is currently receiving treatment in Hadassah Ein Karem Israeli hospital in Jerusalem, would undergo a trial in absentia, on Saturday evening, to extend his arrest for interrogation.

The lawyer, Mohammad Mahmoud, said the police and Israeli Internal Security officers, interrogated the father of the wounded young man, and his brother for seven hours. They were released later, but were ordered to return for further interrogation on Saturday at noon.

The father said he and his family only knew about the incident on TV and Social Media outlets.

He added that his son left home in the morning to look for work, but two hours later, the family heard news about an attack in Jerusalem, and that is when they saw images and videos of their son, wounded and lying on the ground with soldiers surrounding him.

Following the incident and the shooting, clashes took place in different parts of Silwan, and the soldiers kidnapped a child, while a young man was shot by a rubber-coated metal bullet in the face.

Silwanic said that Israeli guards of an illegal outpost in Beidoun neighborhood also provoked two young men, and sprayed their eyes and faces with pepper-spray.

A police car then arrived at the scene, and clashed with local youths, before kidnapping a child, identified as Mustafa Beidoun, 14 years of age, while standing in front of his family’s home.

In addition, undercover soldiers invaded a home, belonging to Sheikh Sabri Abu Thiab, and occupied its rooftop after searching it.

Furthermore, clashes took place in the Schools Street, and the Shayyah neighborhood, in Ras al-‘Amoud after the soldiers invaded them.