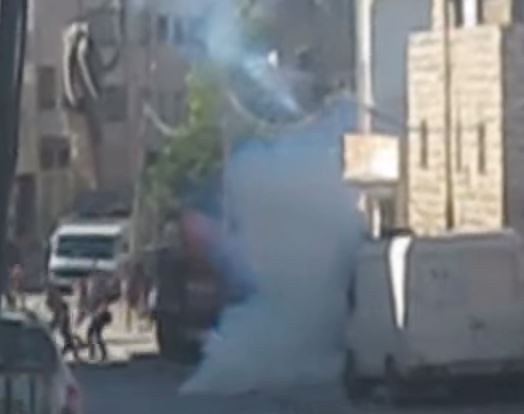 Palestinian medical sources in Hebron, in the southern part of the occupied West Bank, has reported that scores of residents, including children, suffered on Monday morning the effects of teargas inhalation, as Israeli soldiers conducted military training near local schools.The sources said the soldiers fired a large number of gas bombs near the Abu Reesh roadblock, and the elementary schools of Tareq Ben Ziad and Rabe’a, in the Old City, while concocting training and maneuvers.

Eyewitnesses said dozens of soldiers stormed the area, while firing gas bombs and concussion grenades at random, causing scores to suffer the effects of teargas inhalation; local medics rushed to the scene and provided the wounded with the needed medical treatment.

In addition, dozens of soldiers and settlers were deployed in various areas in Hebron, including the Islamic Graveyard area, Ta’lat at-Takrouri and al-Karantina areas, and conducted training using gas bombs and concussion grenades.

Many children suffered panic attacks due to the loud sounds of the soldiers, and their gas bombs.