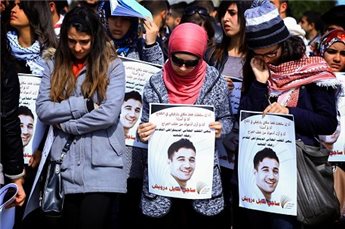 Seven Palestinian students were injured by rubber-coated steel bullets, Tuesday, as clashes broke out near Ofer detention center in Ramallah, witnesses said. Several Palestinians were injured in clashes which took place in Kafr Aqab, while in al-Issawyia, occupied East Jerusalem, a number of lands were leveled by Israeli forces.Students from Birzeit University had gathered to mark the anniversary of the death of 18-year-old Saji Darwish, who was killed by Israeli forces last year.

Soldiers fired tear gas canisters and rubber bullets at the peaceful march, according to Ma’an. One student, Bayan Safi, was assaulted before being detained and interrogated at Ofer jail.

Two Israeli soldiers were hit with rocks during the clashes, one in the face and one in the leg.

Soldiers shot and killed 18-year-old Saji Darwish near the illegal settlement outpost of Givat Assaf last March, after he allegedly threw stones at vehicles belonging to Israeli settlers in the area. See imemc.org/article/67217

Darwish is the 26th youth to be killed by Israeli forces while a student at Birzeit, according to the Birzeit University Public Relations Office.

Thousands of students attended a memorial service in the center of campus for the slain youth last year.

Meanwhile, clashes with Israeli forces left dozens of Palestinians injured in Kafr Aqab, northern Jerusalem, on Tuesday, according to medics.

The Palestinian Red Crescent reported that nine demonstrators suffered injuries from live fire to their lower extremities, and one was left in critical condition.

The clashes broke out after Israeli bulldozers leveled land in the Qalandiya airport area, close to Kafr Aqab. Israel has declared the area a closed military zone.

Sources said that the land was being leveled to continue the building of the separation wall, which already effectively separates the districts of Samir Amis and Kafr Aqab from Jerusalem.

Witnesses said that the ongoing clashes broke out sporadically throughout the day.

On Monday, Israeli forces delivered demolition notices to buildings in the Qalandiya airport area near the wall.

Kafr Aqab was annexed by Israel along with the rest of East Jerusalem in 1980 and falls under its full jurisdiction. However, it has been cut off from the city since the construction of the wall.

In the East Jerusalem town of al-Isawiya , on Tuesday morning, large numbers of Israeli troops and municipality inspectors escorting bulldozers and excavators came into the southeastern outskirts of the town, where they demolished stone walls and steel structures used by local farmers as store houses and livestock barns.

The land is located in an area Israeli authorities have earmarked for a national park, in a controversial plan known as ‘11092’, which aims to turn 700 dunums of land in the Palestinian towns of al-Isawiya and al-Tur into Israeli parkland.

A statement from the Palestinian Center for Human Rights, in 2013, previously stated that ‘the plan is part of the Israeli government’s plans to create a Jewish demographic majority in the occupied city.’

In September 2014, an Israeli planning council suspended the plan until the needs of the Arab towns could be assessed. However, the council, which previously approved the annexation of the 700 dunums, said that approval of the plan could be justified and was not fundamentally illegal.

According to Abu al-Hummus, the local Israeli municipality has ignored the plan’s suspension.

‘Israeli forces brush aside court decisions and decisions made by different committees when it comes to implementing settlement expansion plans,’ he said.

The land leveled on Tuesday is owned by the Abu Asab, Ubeid, Dari, Abu al-Hummus and Ulayyan among others.

East Jerusalem was seized by Israel along with the West Bank in 1967 during the Six-Day War, and since then, the Israeli government has undertaken a policy of ‘Judaization’ across the city, constructing Jewish settlements and demolishing Palestinian homes.

There are now believed to be more than 300,000 Jewish settlers in East Jerusalem.

The international community views East Jerusalem as part of the Palestinian territories and recognizes the annexation and settlement programs as illegal under international law.