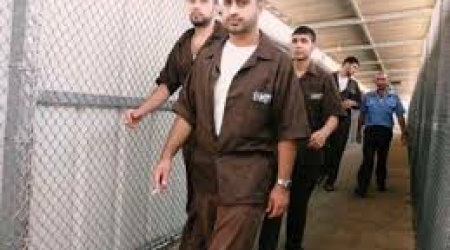 Palestinian prisoners in Israeli prisons, on Tuesday, decided to suspend escalatorysteps planned in protest of the oppressive policies imposed by Israeli Prisons Service (IPS).Palestinian sources, according to Al Ray, said that this suspension came after reaching an initial agreement between prisoners’ representatives and IPS.

Formerly, the prisoners and ex-prisoners committee assured that prisoners in Israeli prisoners were to stage escalatory steps, Tuesday, protesting IPS’ unaccepatable regulations against them.

The committee explained, in a statement, that repressive measures pursued by the IPS against Palestinian detainees, in the recent years, include medical neglect, extreme solitary confinement, daily raids on prisoners’ rooms, deprivation of parental and lawyer visits, deprivation of education and imposing overly expensive fines.

The committee said that prisoners defined their living and humanitarian demands, notably, the improvement of medical treatment for patient prisoners, the end the solitary confinement, an end to the raids and inspections, re-broadcast of the satellite channels, halting the policy of administrative detention, individual and collective sanctions, arbitrary movements against the prisoners, the barring of family visits and the opportunity for secondary education.

The situation in Israeli prisons is about to explode and there is no longer any space to hold out on the IPS violations of prisoners rights, the committee further explained, warning of the seriousness of the situation in prisons, which they may say spin out of control in days to come.

The committee, finally, appealed to all repsective people and associations to rally around Palestinian prisoners’ issue, in their battle and to unify all efforts and positions in the face of the Israeli occupation.

Since 1967, when Israel first officially occupied the West Bank, Gaza Strip and East Jerusalem, more than 650,000 Palestinians have been detained by Israel. This represents approximately 20% of the total population in the Occupied Palestinian Territories (oPt), and 40% of all males.

Despite prohibition by international law, Israel detains Palestinians in prisons throughout Israel, far from their families, who almost never obtain the necessary permits to leave the oPt to visit them.

There estimated to be over 6,500 Palestinian prisoners being held in Israel, of which 10 are members of the Palestinian Legislative Council (PLC).