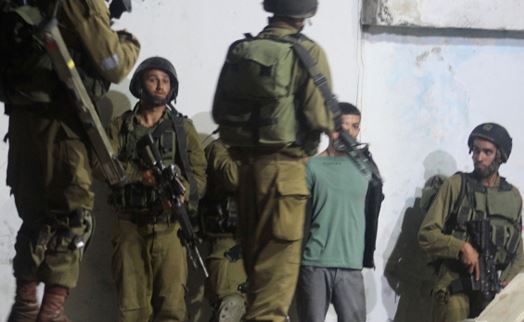 Israeli soldiers invaded, on Tuesday at dawn, Teqoua’ town, east of the West Bank city of Bethlehem, and kidnapped eighteen Palestinian youths, including several siblings, after storming dozens of homes and detonating the front doors of some of them, and assaulted many residents.Head of the Teqoua Local Council Tairseer Abu Mfarreh said the soldiers threatened to conduct an even bigger invasion into the town, and to repeatedly invade it, “should Palestinian youths continue to hurl stones at army jeeps, and settlers’ vehicles.

Abu Mfarreh stated more than 200 soldiers invaded the town, and that the soldiers placed the warning on the local council’s main door.

The soldiers detonated front doors of many Palestinian homes in the town, before invading and violently searching them, and kidnapped eighteen Palestinians, the Ajyal Radio News has reported.

Teqoua’ has been subject to escalating violations, invasions and assaults carried out by invading Israeli soldiers, and settlers living in nearby illegal colonies.

The kidnapped have been identified as: