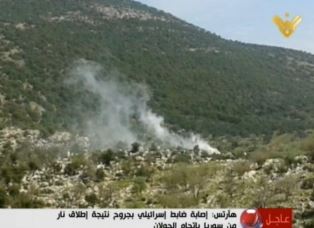 Israeli soldiers crossed the “Blue Line,’ in southern Lebanon, and advanced approximately 50 meters into the Bostra farms area, while firing smoke bombs, the al-Manar TV in Lebanon has reported.Bostra is the only area of the Sheba farms in southern Lebanon that the army withdrew from, while the remaining areas are under Israeli occupation.

“This is our land, a Lebanese territory; they invaded it and fired smoke bombs,” a local farmer said, “They were about 200 meters away from my home; we will never leave our homes and lands, no matter what,”

Later on, the soldiers fired nearly 16 rounds of live ammunition towards Lebanese security vehicles, patrolling close to the border.

The army also fired three rounds of live ammunition on al-Manar TV crew while documenting Israeli assaults in the Sheba Farms, in an attempt to force them away.

It added that the soldiers withdrew from the area later on, while the TV crew remained, and continued its work.

On January 17 of this year, Israeli soldiers attacked a Hezbollah convoy near the border, killing six Hezbollah fighters, and an Iranian general.

After the attack, Hezbollah fighters fired rockets into the occupied Shebaa Farms, in southern Lebanon, killing two soldiers and wounding several others.