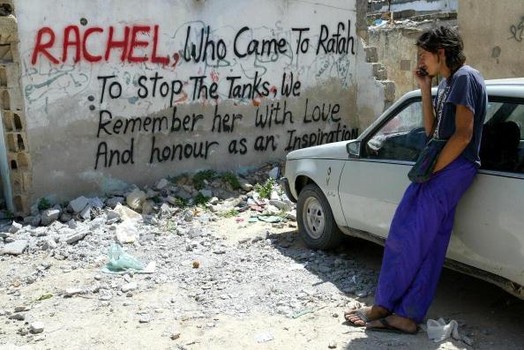 It is no secret that Caterpillar has a multi-million dollar contract with the State of Israel, providing machinery used to demolish homes, destroy agricultural land, uprooting ancient Palestinian olive groves — and sometimes — taking human lives.

The toll these machines have taken on Palestinian lives is truly horrifying! According to the Israeli Committee Against House Demolitions, the Israeli human rights organization, 18,555 structures have demolished just since January 1, 2015. These demolitions of structures, land, and livelihoods have displaced approximately 490,000 Palestinians — with 552 homes demolished in the West Bank alone. (http://www.icahd.org/)

Palestinians are currently struggling with some of the highest poverty levels comparable to the poorest parts of Sub-Saharan Africa — in the words of the United Nations it bears the “effects of a terrible natural disaster”, though one created by people and politics. A key source of this poverty is the destruction of agricultural land, the only possible source of livelihood open to many Palestinians.

Caterpillar bulldozers have been used to rip up extensive areas of cultivated land, destroying thousands of olive and citrus trees. The destruction of wells, storage tanks and water pumps has severely limited access to drinking water.

There is a fantasy called ‘Corporate Social Responsibility.’ In this fantasy, multi-million dollar corporations, mainly headquartered in the United States, attempt to replace social conscious with public relations. So concerned is Caterpillar with “doing good” that when UN Special Rapporteur Jean Ziegler wrote to Jim Owens in May 2004 expressing his concerns that Caterpillar may be complicit in violating the Palestinian’s right to food enshrined in the International Covenant on Economic, Social and Cultural Rights, Mr Owens did not even bother to reply.

On the afternoon of March 16, 2003, American advocate for Palestinian liberation and volunteer activist, Rachel Corrie, who was only 23-years-old, was demonstrating as an international witness at a site in Rafah, Gaza, near a house set for demolition by Israel.

Rachel was known to Palestine’s International Middle East Media Center. The IMEMC Media Literacy Center in Beit Sahour, West Bank, Palestine, was forming in 2003, when Rachel and many other international volunteers utilized the offices (then shared by the Palestinian Center for Rapprochement and the International Solidarity Movement). Rachel regularly visited the Center to utilize the web connection and write her journal entries and articles. She also took advantage of the programmes we offered at the time in educating international volunteers on the context of daily Palestinian life juxtaposed with the regular raids and extradjudicial arrests. My colleagues who knew Rachel described her as someone deeply concerned with the plight of the Palestinian people and eternally hopeful and optimistic.

On that March 16th afternoon in Rafah, Rachel stood in front of a Palestinian home with the intent of preventing its demolition. The Caterpillar D9 driver initially dumped sand on Rachel Corrie, later driving over her as the demolition continued. Never would any of us have dreamt that the driver of that bulldozer would kill Rachel. The driver had every opportunity to stand down from the machine, to stop the demolition, to speak to his commanders, to negotiate with Ms. Corrie. Instead, as if Ms. Corrie’s life was as worthless as the sand he dumped on her, the Israeli Caterpillar operator decided in that moment to violently kill Rachel Corrie.

Since the killing of Rachel Corrie a number of churches, unions, universities, and others have divested from Caterpillar Inc. Some of those who have divested include: the American Presbyterian Church, along with the Church of England, the World Council of Churches, the United Church of Christ, the United Methodist Church, the Episcopal Church in America, the University of California (Irvine, Berkeley, Riverside, San Diego, Santa Cruz, Davis, Los Angeles), Stanford University, Loyola University of Chicago, IMPACT (Ireland’s largest public sector and trade union), the United Church of Canada, the UCC, the Canadian Union of Public Employees, the Congress of South African Trade Unions, England’s University of Sussex, a number of organizations making up part of the European Union, and Caterpillar Inc. was removed from three ‘socially responsible’ stock indices by the American investment firm MSCI.

MSCI cited Israel’s use of Caterpillar bulldozers in the Palestinian territories as a key reason for its decision.

But, there is more work left to be done.

As the Palestinian Authority has called for a popular ‪#BDS‬ movement with the stated goals that ‘these non-violent punitive measures should be maintained until Israel meets its obligation to recognize the Palestinian people’s inalienable rights to self-determination and fully complies with the precepts of international law by: 1) Ending the brutal and illegal occupation and colonization of all Palestinian lands and dismantling the illegal separation wall. 2) Recognizing the fundamental rights of the Palestinian-Arab citizens of Israel affording them full equality, and 3) Respecting, protecting, and promoting the rights of Palestinian refugees to return to their homes and properties as stipulated in United Nations Resolution 194.’

Ultimately corporate complicity in the sort of grave human rights violations witnessed in the Occupied Palestinian Territories will only halt when corporate behavior is regulated, not by voluntary Codes of Conduct written by over-paid PR consultants, but by an international system of laws, accountable to people.

On this, the twelfth commemoration of the murder of Rachel Corrie, let us remember her compassion, solidarity, and love of Palestine, by encouraging our friends and neighbors to join the BDS movement and force Israel, its complicit corporate allies, and governments of the world who tacitly support Israel’s subjugation and torture of the Palestinian people, to end this nightmare once and for all.

Rachel, you are missed and loved. Your life had meaning beyond anything you could have ever dreamt. Thank you for standing up for Palestine!