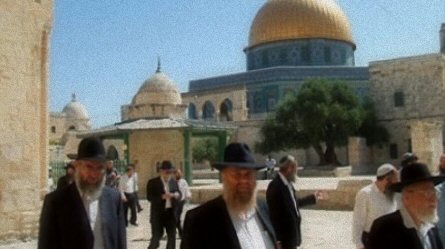 Extremist Jewish settlers stormed the courtyards of Al Aqsa Mosque from the Mughrabi gate, on Thursday morning, amid tight security from a private Israeli police force.The media coordinator at the Islamic Waqf in Jerusalem, Firas AL-Debes, told Al Ray Palestinian Media Agency that 38 settlers, spread over 4 groups, stormed the Al-Aqsa courtyards, noting that the settlers carried out provocative rounds in front of worshipers, while students in Quran study circles raised their voices in chanting, ‘Allahu Akhbar! (God is Greatest.)’

Extremist Israeli settlers and politicians have been violating the sanctity of the historic Mosque on an almost daily basis and always under the protection of armed occupation forces, which often attack Palestinian worshipers who try to protect their holy site.

The Israeli occupation of the Palestinian territories, of which East Jerusalem is a part, is illegal under international law.