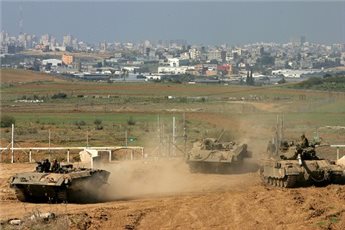 Four Israeli bulldozers and a military vehicle entered Palestinian land near Rafah, in the southern Gaza Strip, on Thursday, witnesses told Ma’an News Agency.The incident marks the continuation of high activity in densely populated Rafah, as the Egyptian army demolished 1,020 houses Tuesday in the second stage of the establishment of a buffer zone along the border with the Gaza Strip.

In a separate incident Thursday, Israeli forces opened fire at Palestinian fishermen across the al-Sudaniyya shore off Gaza City.

An Israeli army spokeswoman told Ma’an that the bulldozers were stationed adjacent to the security fence in response to ‘suspected activity’ in the area.

She did not have any immediate information about the shooting incident at sea.