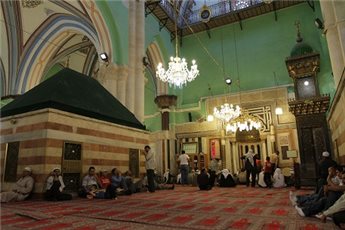 A group of Israeli settlers entered the Isaac Hall inside the Ibrahimi Mosque, in Hebron, on Thursday under armed protection from Israeli forces, witnesses said.Local sources said that guards attempted to prevent settlers from entering the mosque, but that the army facilitated their entrance.

Under an agreement with endowment officials, Jewish visits to Isaac’s Hall are limited to 10 per year, Ma’an further reports.

The agreement came into place after a Brooklyn-born Jewish settler massacred 29 Palestinians in the mosque after opening fire at worshipers in 1994.

The Ibrahimi Mosque is known to Jews as the Cave of the Patriarchs, and is the site where both faiths believe the Biblical patriarch Abraham is buried.

Around 700 settlers live in 80 homes in the city center of Hebron, surrounded by nearly 200,000 Palestinians. The settlers are protected by the Israeli army in the tightly controlled city, where many streets are off limits to Palestinians.

Also from Ma’an: 05/27/14 Increase in Israeli Violations Against Holy Sites in oPt