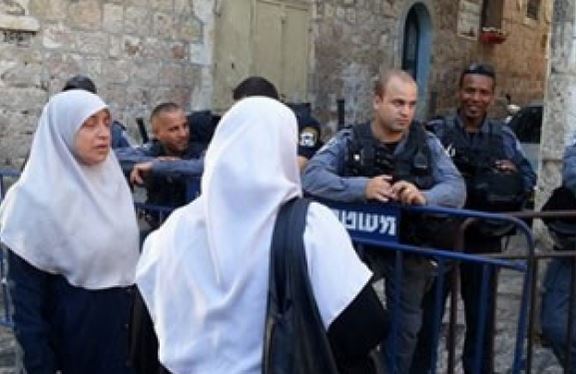 The Israeli Police released Sunday a young Palestinian woman from occupied Jerusalem, after imposing a 5000 NIS fine on her, and ordered her away from the Al-Aqsa Mosque for fifteen days. She was one of four Palestinians kidnapped, Sunday, near the Al-Aqsa Mosque.Lawyer Ramzi Kteilat of the Qodsona Foundation for Human Rights, said resident Sondos al-Qawasmi was released after the court issued its verdict.

Abu Gharbiyya will be sent to court Monday, while the Nasser will remain under interrogation allegedly for “attacking an Israeli settler.”

In addition, the police released an elderly man, identified as Ribhi Khader Abu al-Hummus, 70 years of age; he has to appear in front of the District Court, Monday.

Lawyer Kteilat said the detained Palestinians were all kidnapped, on Sunday morning, in front of the gates of the Al-Aqsa Mosque.

He added that the police attacked many Palestinians, and kidnapped five, after they tried to prevent a group of Israeli extremists from raiding the yards of the Al-Aqsa Mosque.