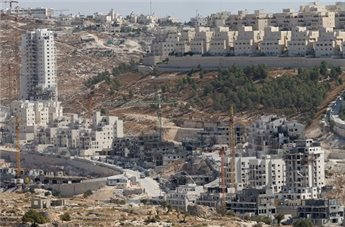 As tension mounts with Washington, Israel’s outgoing government has suspended a controversial plan to build hundreds of new settler homes in occupied East Jerusalem, a news website reported Wednesday.According to AFP, the plan involves the construction of 1,500 homes in the settlement neighborhood of Har Homa, where Prime Minister Benjamin Netanyahu gave a controversial speech on the eve of March 17 elections, pledging to build thousands of new homes if returned to office.

His remarks on East Jerusalem construction, along with comments ruling out a Palestinian state, have sparked a bitter spat with Washington.

Ynet said the Netanyahu’s office had frozen the plans due to their ‘political sensitivity.’

Daniel Seidemann, director of settlement watchdog Terrestrial Jerusalem, told AFP that given the ‘highly problematic’ nature of the plan and Netanyahu’s current standoff with Washington, it had ‘a ring of truth’ to it.

‘This would be a particularly inflammatory plan and I think that he’s afraid that the ceiling would cave in on him,’ he said.

The report quoted unnamed housing ministry and Jerusalem municipality sources as saying two meetings to discuss advancing the plans had been cancelled for reasons that were unclear.

Planning officials said Netanyahu’s office had not given the green light for the meetings.

In response to a question from AFP, Netanyahu’s office neither confirmed nor denied the report, saying the plan ‘was not sent to the prime minister’s office.’

‘Regarding other plans that were not brought up this week, there will be a discussion on the matter when the new government is in place,’ it said.

Netanyahu is to be formally tasked Wednesday with building a new coalition, which is likely to take several weeks.

While unable to confirm details in the report, Seidemann said the plan was for construction on private land west of Har Homa that had been shelved a year ago but was now being brought up for initial approval.

He said there had been an unofficial freeze on east Jerusalem construction since the approval in late September of thousands of housing units in Givat HaMatos, a settlement suburb currently being built.

‘Since the approval of Givat HaMatos – and I’m speaking exclusively about East Jerusalem — there have been no new tenders, no new plans deposited for public review and no new plans approved — which is quite remarkable,’ he said.

This plan is a private initiative, meaning that Netanyahu’s ability to block it would be limited, he said.

‘Netanyahu is obviously going to be very cautious at the moment given the nature of his relations with the US. On the other hand, his authority to hold up a private plan is limited,’ he said.

If the plan were given the green light, it would complete a ring of settlement neighborhoods around East Jerusalem, effectively cutting off the Holy City from the southern West Bank.

That would created ‘an effective buffer between Bethlehem and Jerusalem, and that is a game changer,’ he said, as it would further complicate establishing a viable and contiguous Palestinian state with East Jerusalem as its capital.

Since occupying East Jerusalem in 1967, Israel has constructed tens of thousands of homes for Jewish settlers while restricting Palestinian construction in the city, part of a broader policy of ‘Judaization.’

Today around 550,000 Jewish Israelis live in settlements across the West Bank and East Jerusalem.

See also: Obama Administration on Israeli Election: ‘Enough With the UN Cover Up’