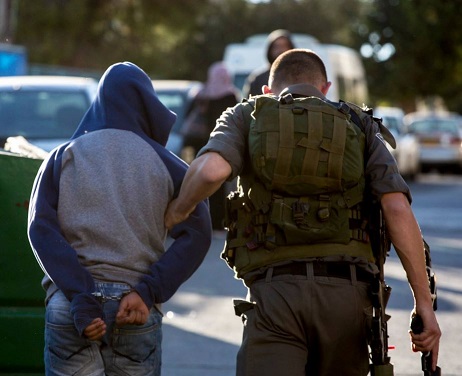 Dozens of Israeli soldiers invaded, on Thursday morning, the southern West Bank district of Hebron, searched and ransacked homes, and kidnapped five Palestinians, including two children. Army orders six families to halt the construction of their homes; families ordered to remove tent and three rooms. Media sources in Hebron said the soldiers invaded the al-‘Arroub refugee camp, and kidnapped two children after searching their homes, and many other homes in the camp.

The two have been identified as ‘Omar Jasser Sharif, 15, and Hakam Taleb Sharif, 14 years of age.

The three were kidnapped after the army stormed and violently searched several homes.

In addition, several military jeeps invaded Surif town, west of Hebron, and handed notices to six families ordering to halt the construction of their homes, in Deir Mousa area, northwest of the town.

Lafi said some of the homes are already inhabited, and that the families were trying to conduct maintenance, and expand their properties.

Coordinator of the Popular Committee Against the Wall and Settlements, Rateb Jabour, said the area has been subject to frequent attacks by the army, and by Israeli fanatics living in nearby illegal colonies.

Jabour voiced an appeal to local and international legal and human rights organizations to intervene and oblige Israel to stop its violations, especially since Israeli is trying to force the residents out of their homes and lands so it can build and expand its illegal colonies.