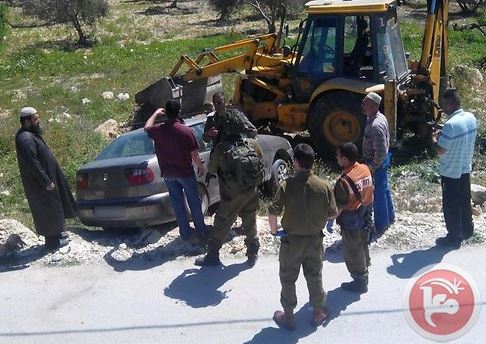 A Palestinian driver crashed his own car, Thursday, after an Israeli soldier stopped him, searched his car, and forced him to drive him to the Yitzhak illegal colony, near the northern West Bank city of Nablus. The Palestinian contacted the army and told him of what happened.The Maan News Agency has reported that an Israeli soldier of the Golani Brigade waved to a Palestinian driver, 19 years of age, ordering him to stop, and searched his car before ordering him to drive him to the Yitzhar illegal colony, built on Palestinian lands near Nablus.

Maan said that the Palestinian was leaving his chicken farm, near settlement road #60, when the soldier stopped him; he thought the soldier wanted to inspect the car and his ID, but feared the worse when the soldier actually ordered him to take him to Yitzhar.

The young man feared that the soldier is trying to kidnap him, especially since he ordered him to drive him to Yitzhar, swerved the car while driving and crashed it into a ditch at the side of the road, and ran away.

Israeli sources said the soldier left the car unharmed and stopped an Israeli bus transporting soldiers to a nearby military base, while the Palestinian driver also rushed and contacted the army.

The soldiers then managed to track the Israeli bus, stopped it, and had the young Palestinian driver identify the soldier who stopped him.

Israeli army spokesperson said the military opened an investigation into the incident, and intends to move the case to the Military Prosecutor’s Office.