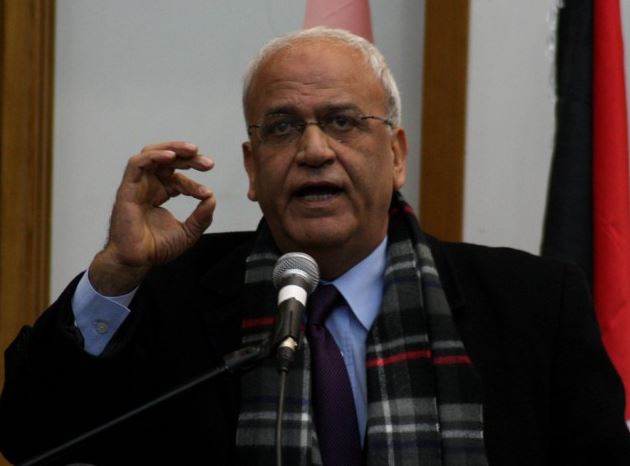 Chief Palestinian Negotiator, Dr. Saeb Erekat stated that Palestine would be announced, Wednesday, an official member of the International Criminal Court (ICC) in The Hague, adding that the Palestinian Authority has concluded all technical and legal preparations.Erekat said the move would enable Palestine to become a member of 523 international treaties and organizations, adding that the two files on Israel’s colonies, and its aggression and wars, will be soon finalized before being submitted to the ICU in April.

The official, also a member of the Palestinian committee in charge of ICC preparations, said the ICC has already started, nearly two months ago, an initial investigation into Israeli war crimes in the Gaza Strip, the West Bank and Jerusalem, in addition to its illegal settlement construction and expansion activities.

The initial investigation started directly after the Palestinian Authority signed Article 12(3) of the Rome Statute.

“The legal and technical committees have been extensively working on finalizing the two files, and all related articles,” Erekat said, “We will conduct all practical moves directly after Palestine is officially declared an ICC member Wednesday.”

Erekat also stated that Palestinian Foreign Minister Riyadh al-Maliki would be representing Palestine, Wednesday, and will be holding a meeting with the Prosecutor of the International Criminal Court (ICC), Fatou Bensouda.

He said the official investigation will start after April 1, and that the files on Israel’s crimes against the Palestinian people will continue to advance to the best interests of the Palestinians, and their cause.

The Palestinian Authority signed the Rome Statute after the UN Security Council vote on ending the Israeli occupation of Palestine failed to pass back in early January. Signing the Statute enables Palestine to join the 123 member states of the ICC.