Five Palestinians Kidnapped Near Ramallah, One Injured Near Bethlehem 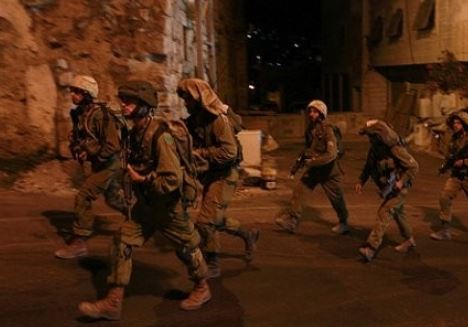 Israeli soldiers kidnapped, on Thursday at dawn, five Palestinians near the central West Bank city of Ramallah, and injured one Palestinian near Bethlehem. Army sources said a soldier was stabbed on a roadblock, near Salfit.Several Israeli military vehicles invaded Deir ‘Ammar village, near Ramallah, after besieging it, and surrounded a number of homes, before breaking into them, and kidnapped the five Palestinians.

In addition, soldiers shot and injured Yousef Sayel Sa’id, 24, after the army invaded the Old City of al-Khader, south of Bethlehem.

Sa’id was shot by a rubber-coated metal bullet, and suffered a moderate injury, while standing on the rooftop of his family’s home; he was moved to a hospital for treatment.

In addition, Israeli army sources said a soldier was moderately injured, after being stabbed by a Palestinian, on a military roadblock, near the central West Bank city of Salfit.

The army said the Palestinian stabbed the soldier with a sharp object, before the soldiers arrested him.