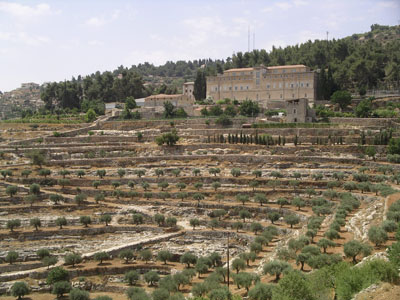 A Bethlehem-area monastery that was slated to be split in half by the Israeli Annexation Wall has won its appeal in the Israeli High Court, after a nine year struggle that involved multiple court cases and non-violent direct action to save the monastery.The ruling follows a long saga involving monks, nuns, bishops, Palestinian Christian residents of the Cremisan Valley, and international supporters. In 2013, the Special Appeals Committee of the Tel Aviv Magistrate’s Court ruled against the monastery and residents, saying that the Wall could be constructed through the center of the Cremisan Valley, which is home to a convent, monastery, religious school and 58 local families.

The petitioners decided to appeal that decision to the Israeli High Court, which ruled in their favor on Thursday. The Court rejected a proposal introduced by the Security and Peace Commission, an Israeli organization consisting of former Israeli Army officers and generals, which called for the Wall to be constructed through the center of the Valley, splitting church and private land in half. The Security and Peace Commission said that they would put a door in the Wall to allow the monks and nuns to go through (at the Israeli army’s discretion).

The petitioners, which include Christian families, church representatives and the monastery leadership, called for the route of the Wall to be changed, to annex less Palestinian land. The Israeli Annexation Wall, most of which has already been constructed, snakes through the West Bank annexing thousands of acres of Palestinian land to the state of Israel, and effectively annexing hundreds of illegal Israeli settlements, constructed on stolen Palestinian land, into Israel.