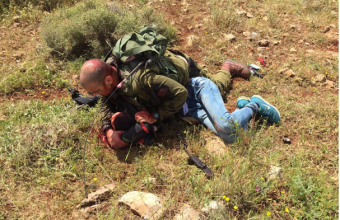 An Israeli soldier was injured Thusday, after a youngster stabbed him in the head at the Oranit checkpoint, south Qalqilya city, northern occupied West Bank.PNN sources claim that the soldier sustained light to moderate injuries in the head, after being stabbed by the suspected youth.

‘A short time ago, the IDF arrested six Palestinians who hopped the fence near the Trans-Samaria Checkpoint,’ the army said in a statement.

The soldier was moved to hospital for treatment, the attacker detained by Israeli police.

Ma’an further reports that the stabbing was the first attack on Israeli military or civilians since early March, when a Palestinian man drove his vehicle into a group of border police standing in front of a station between East and West Jerusalem, striking five people.

In the same time period, meanwhile, Israeli forces have shot and killed two Palestinians and injured around 170 Palestinians, the majority during attacks on protests as well as during raids, according to the United Nations.

The figure does not include attacks by Israeli settlers.