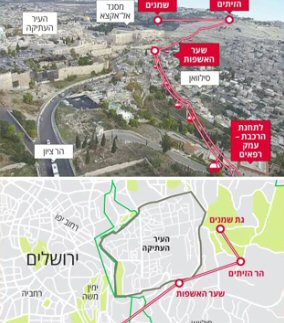 Despite recent setbacks, the Jerusalem municipality continues to promote construction of a cable car system in occupied East Jerusalem as part of its ongoing attempt to transform the area around the Old City.

On March 26, two French firms, Safege and Puma, canceled their participation in the cable car project after being warned about the legal risks involved by the French finance and foreign ministries.

“The plan will lead to the illegal expropriation of private property, some of which belongs to the Waqf,” Erekat wrote to Fabius.

Subsequently, the French administration secretly called a meeting with Safege’s directors. On March 12, the French Finance Ministry warned the company’s board about the legal risks the project entailed, and the company says it sought a legal opinion on the matter.

Another French company that had expressed interest in the project, Puma, has since declined to get involved, also.

The Jerusalem municipality nevertheless is moving forward with the project, originally announced in 2013, and a plan will soon be submitted to Jerusalem’s planning committee.