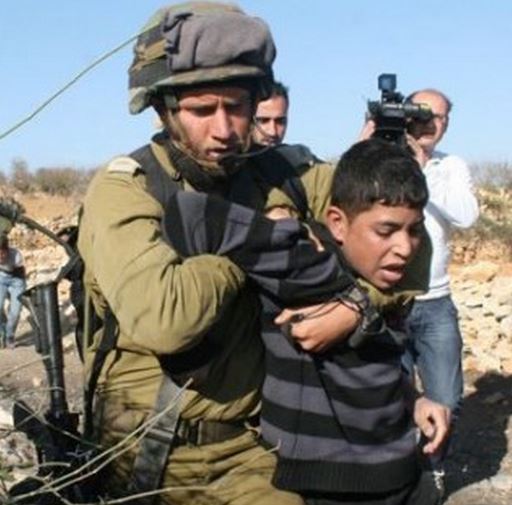 The Palestinian Prisoner Society (PPS) has reported that Israel is holding captive nearly 200 Palestinian children in three main prisons, and that at least 100 of them are held in the ‘Ofer Prison, near the central West Bank city of Ramallah.The PPS said that, besides ‘Ofer prison, the children are also held in Majeddo and HaSharon detention centers.

In its Sunday report marking the Palestinian Children Day, the PPS stated that two girls are among the detained children, identified as Dima Sawahra from Jerusalem, and Hala Abu Sil from Hebron; both are held in the women’s section of the HaSharon prison.

The PPS said the army has escalated its arrests of Palestinian children since June 2014, kidnapped and detained hundreds of children who were held and interrogated without legal representation, and without the presence of any adult family member.

The PPS added that most of the children were later released, after their families were forced to pay excessive fines, and are largely forced under house arrest.

Many released children are not allowed back home as their release is contingent on an agreement with a relative, who is willing to house them for a certain period, after signing a third-party bail.

In addition, the PPS stated that Hebron witnessed the second largest number of arrests as the soldiers have kidnapped more than 70 children, since the beginning of the year.

Commenting on violations against the children, the PPS said the soldiers conduct the majority of arrests during late-night hours, and at dawn, after invading Palestinian homes and violently searching them, including using army dogs during the search, terrifying the children and their families.

It added that the kidnapped children are physically and emotionally tortured, are not allowed family visits during interrogation, in addition to being denied the right to legal representation or at least the presence of a parent during interrogation.

This issue pushed many children to “confess” to whatever the army is accusing them of, as they have no legal representation and face intimidation and torture.

They are also treated as adults, are sent to civil courts in addition to military courts, and face harsh conditions.

Articles Archive About The Detainees
http://www.imemc.org/newswire?topic=prisoners