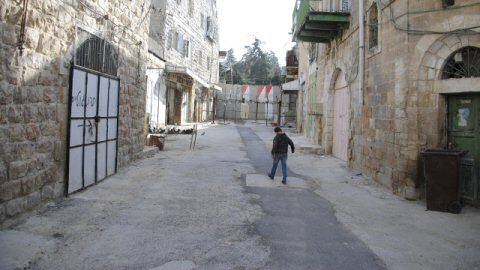 The southern West Bank city of Hebron is under what local Palestinians are calling a siege to enable tens of thousands of Israelis to celebrate the holiday of Passover this week by invading the city.Israeli forces are stationed at all entrances to Hebron, the largest city in the West Bank with a population of some 170,000 Palestinians. Checkpoints have also been set up at the entrances of the nearby towns of Bani Na’im, Idhna, Sa’ir, Halhul, al Samou and Beit Awwa, where soldiers have been halting all vehicles with Palestinian registration plates and checking the identification papers of passengers.

The Palestinian news and info agency reports that Israeli soldiers assaulted Muhammad Qatuf, age 40, at a Hebron checkpoint Monday, hitting him with the butts of their rifles. Qatuf was admitted to the HebronPublicHospital, where his condition was described as stable.

Israeli military presence is particularly pronounced in Hebron’s downtown area. Numerous roads and side streets were closed to Palestinians, particularly those to the east of the Ibrahimi Mosque, thus forcing the thousands of residents living in this area to take alternative, longer routes home which could add up to 12 kilometres to their journeys.

The Hebron Defense Committee reports that the army closed off parts of H1, the area of the city ostensibly under Palestinian Authority control, so that Israeli visitors could move about freely.

Soldiers further occupied numerous roofs of Palestinian-owned homes in downtown Hebron. Local resident Nidal Ja’abari told the AIC that his home has become a military centre and he was ordered not to close the main gate of the house so that Israeli soldiers could move freely.

Israel closed the Ibrahimi Mosque to Muslim worshippers on Sunday and Monday, allowing only Israelis into the site known to them as the Cave of the Patriarchs. Hijazi Abu Sneineh, director of the Ibrahimi mosque, told the Palestinian press that Israeli authorities informed Palestinian officials of the closing order.

Some 50,000 Israelis invaded Hebron on Sunday and Monday, according to the Israeli press.

The settler-affiliated news site kippa reports that as well as entering the Ibrahimi Mosque, Israelis walked through the area’s settlements, located in the heart of the city. A free music festival on Monday was a big draw, as was the newly refurbished Museum of the History of Hebron’s Community, which featured a sound and light show.

Speaking at February’s opening ceremony of the refurbished museum, Israel’s supposedly moderating force, President Reuven Rivlin, said “Our roots are planted deep in the soil of Hebron. For me this is not a cynical or political statement, but a fundamental one which on the public level means the Jewish settlement in Hebron is a story of our nation”.