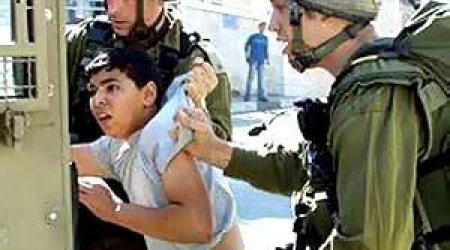 Israeli police have detained five minors, Tuesday, from different parts of occupied Jerusalem, under the pretext of throwing stones.According to lawyer Mofed al-Haj, the detainees were identified as Joseph al-Roug, 15 , who was taken to investigation the center of Qishleh, in addition to Hazem and Husam Saeda, who were transferred to room 4 of Moscobiya center.

Minors Jaber Abdul Rahman, 15, and Abdul Ghani Amjad, 14 years, from the Old City district, will be transferred to the court for extension of their arrests, according to Al Ray Palestinian Media Agency.

Despite international condemnation, occupation forces continue to arrest children. Approximately 700 Palestinian children under the age of 18, from the West Bank, East Jerusalem and Pre-1948 occupied Palestine are prosecuted every year through Israeli military courts.

The most common charge against children is throwing stones, which under military law is punishable by up to 20 years in prison. Currently 210 Palestinian children are held in Israeli prisons.

Also in Jerusalem on Tuesday, Al-Aqsa foundation for Waqf and Heritage stated that the Temple Institute seeks to turn the Tankaziya school in Al-Aqsa mosque into a synagogue.

Amir Khateeb warned of such plans, noting that this one aims to remove the Tankaziya school. He explained that Israeli forces took the school and made it a garrison and a part-time temple.

Israeli occupation authorities has changed the prayer place in the school into a temple for the Israeli soldiers who work in Al-Aqsa mosque, since it announced it a military station in 1969.

Khateeb urged concerned parties to take some actions in order to stop these plans.

Aviad Wesley the head of ‘Coalition for the Temple’ asked, in a letter to the Israeli police commander in Jerusalem, to allow the members of Temple Institute to practice their religious ritual in the prayer place of the school.

Raed Salah, leader of Islamic movement in the occupied territory has warned of the Zamoh plan since 2008. He stressed that Tankaziya school is an integral part of Al-Aqsa Mosque.

Tankaziya School dates back to Mamluk era. The Prince Sayf al-Din Tnkz built the school in the fourth century AD.