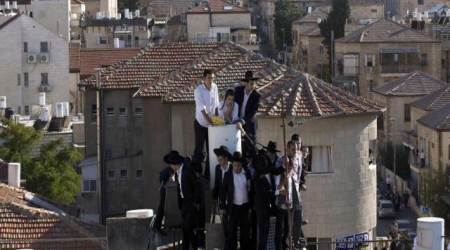 Hundreds of Jewish settlers stormed the occupied West Bank flashpoint site of Joseph’s Tomb, in the early hours of Wednesday morning, and performed Talmudic rituals inside, said a Palestinian activist.’At least 16 Israeli buses carrying 400 Jewish settlers arrived at the site and the latter performed Talmudic rituals under the protection of the Israeli army,’ local activist Ahmed Shamekh said, according to Al Ray correspondence.

Clashes sparked in the site after dozens of Palestinians gathered to protest the incursion, he said.

‘The Israeli soldiers fired teargas to disappear the angry youths,’ Shamekh added, noting that no injuries were reported among the Palestinian demonstrators.

Joseph’s Tomb, located on the outskirts of the West Bank city of Nablus, has long been a flashpoint for potential violence between Jewish settlers and Palestinians.