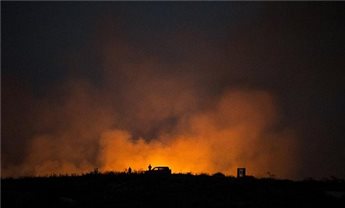 A military intelligence detention center belonging to Palestinian security forces in Hebron caught fire, Wednesday, killing one person in detention at the facility.Palestinian firefighters and civil defense rushed to the scene and managed to extinguish the fire but were unable to do so in time to save the detainee’s life.

Head of military intelligence in Hebron, Ibrahim Zawahra, told Ma’an News Agency that an investigation had been launched to determine the causes of the fire.

Military prosecutor Issa Amro, meanwhile, said an autopsy had been ordered to determine the cause of death.

He added that people present at the time of the incident were also being questioned.