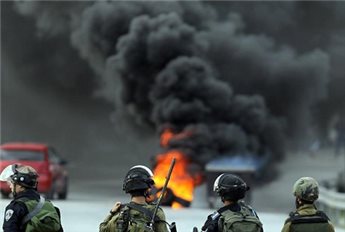 Israeli forces injured 12 Palestinian youth after firing live and rubber-coated bullets during clashes in al-Jalazun refugee camp, north of Ramallah, on Friday.Three Palestinians were injured by live fire, and a further nine by rubber-coated steel bullets. They were taken to a Palestinian medical complex with light to moderate injuries.

The clashes broke out close to the wall that Israeli is building to seal off the illegal Israeli settlement of Beit El, according to Ma’an News Agency.

An Israeli army spokeswoman said she was looking into the incident.

The clashes come just two weeks after thousands of Palestinians attended the funeral of a young man buried in al-Jalazun refugee camp.

20-year-old Ali Mahmoud Safi, who succumbed to his wounds on March 25, after being shot by Israeli forces during a protest near Ramallah a week earlier, was buried in the al-Shuhada (Martyrs’) Cemetery inside the camp.

Head of a popular committee in the al-Jalazun refugee camp, Mahmoud Mubarak, said that the camp is being ‘systematically and unnaturally’ attacked by Israel, and that there are daily clashes and injuries in the camp.

Mubarak called Safi ‘the first martyr this year,’ and said that four others were killed the year before in the refugee camp.

Safi was shot on March 18 with a .22 caliber ‘tutu’ bullet that pierced his chest and led to massive internal bleeding, leading to his death a week afterwards.

Eight other Palestinians were injured during the Israeli attack on the protesters.