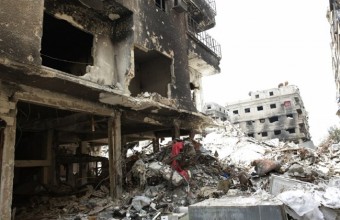 Palestinian leadership has rejected the idea of joining the battle in Syria’s Yarmouk camp, apparently ruling out involvement in a joint military operation to expel ISIS.The position was made clear in a statement released late Thursday by the Palestinian Liberation Organization, from its headquarters in the West Bank city of Ramallah, PNN reports.

It came just hours after Ahmed Majdalani, a senior PLO official who is currently in Damascus for talks, said that 14 Palestinian factions backed the idea of a joint military operation with the Syrian army to expel the ISIS jihadis from the camp where more than 15,000 people, mostly Palestinian refugees, are trapped.

But the PLO affirmed that its traditional position of non-involvement had not changed.

‘We refused to drag our people and their camps into the hellish conflict which is happening in Syria and we categorically refuse to become one of the parties involved in the armed conflict that is taking place in Yarmouk,’ it said.

‘We refuse to be drawn into military actions, whatever or wherever they are, and we call for other means to ensure the safety of lives in Yarmouk, and to prevent more destruction and forced displacement.’

Majdalani had said that the Palestinian forces would work in an ‘integrated’ fashion ‘with the Syrian state to clear the camp of terrorists’.

Once home to some 160,000 Syrian and Palestinian residents, Yarmouk has been devastated by violence since late 2012, with about 18,000 people left in the camp.

Since the ISIS attack on April 1, around 2,500 people have managed to escape, some giving a grisly account of the atrocities perpetrated inside the camp by the jihadi forces.

The Palestinian leadership has frequently said it ‘would not get involved in [internal] Syrian affairs’.