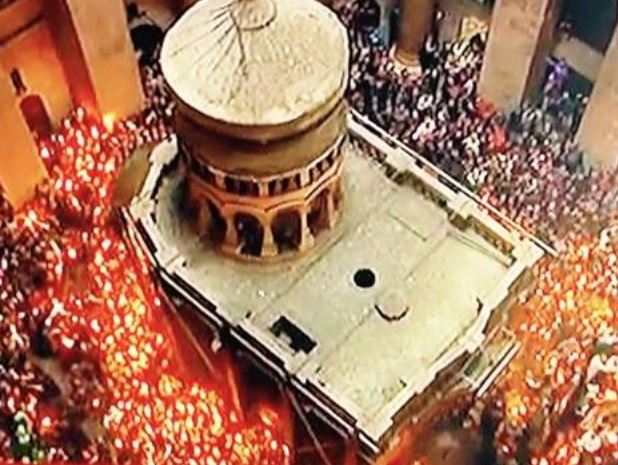 Thousands of Christian pilgrims filled Jerusalem’s ancient Church of the Holy Sepulcher, on Saturday, for the ‘Holy Fire’ ceremony which marks the eve of Orthodox Easter.The ceremony, celebrated by Palestinian Christians across the Holy Land, takes place each year on ‘Holy Saturday,’ or ‘Saturday of Light’ in Arabic, marking the day following Good Friday, when Christians believe Jesus Christ was crucified in Jerusalem, and the day before Easter, which marks his resurrection from the grave.

Palestinian Christians as well as Eastern Orthodox Christians from around the world believe that, on the Saturday between these two holidays, a divine fire from heaven appears above his tomb in the Church of the Holy Sepulcher.

Believers hold that this fire ignites candles held by the Greek Orthodox patriarch, in an annual rite dating back to the 4th century that symbolizes the resurrection of Christ.

Every year, thousands gather in Jerusalem’s Old City to welcome the fire, which is subsequently brought to churches in Palestinian towns and villages throughout the Holy Land.

This year both Palestinian Christians as well as large numbers of East European pilgrims swiftly passed the light on from candle to candle as it emerged from the church.

The flame is also flown out to Greece and other Orthodox countries.

Israeli police spokeswoman Luba Samri said tens of thousands of Orthodox Christians flocked to the church and surrounding streets in the annexed East Jerusalem’s Old City for the ceremony, held under a heavy police presence.

The Holy Sepulcher church is built on the site where Christians believe Jesus was crucified, buried and resurrected, and the event is the highlight of the Eastern Christian calendar.

Thousands of Palestinian Christians from the occupied territories were unable to reach the Church due to Israeli restrictions.

Although Israel claims to grant many entry permits to go to Jerusalem, such permits are granted to one or two family members, especially the elders, while the rest are denied access, an issue that makes many of those who got permits prefer to stay home with their families.

A Palestinian Christian woman from Beit Sahour told the IMEMC that, despite being allowed to go to Jerusalem, she elected to stay in the town, and celebrate in her church, especially since she cannot walk for extended distances, or be subject to the strict Israeli measures or searches, in addition to having to go through numerous Israeli roadblocks in Jerusalem, especially near the Church of the Holy Sepulchre.

The ‘Palestinian Christians Facebook group published pictures of the Church area in Jerusalem, showing dozens of soldiers around it, and said Israel turned the area into a military base.

It said the soldiers installed roadblocks at the entrance of the Old City of Jerusalem, and even on the rooftop of the Holy Sepulcher Church.