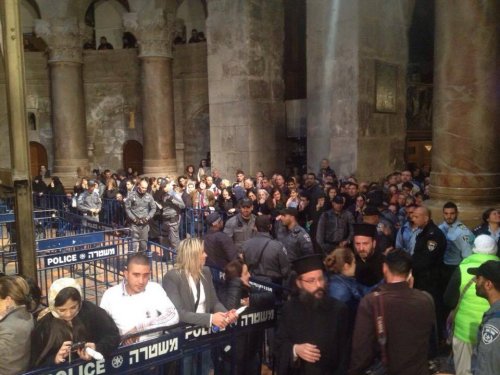 Israeli police, on Saturday, beefed up their military presence and procedures across Jerusalem, preventing Christians from reaching Al Qiyamah Church to celebrate their holidays.
WAFA correspondence reports that Israeli police set up hundreds of military checkpoints and roadblocks at all entrances of the old city of Jerusalem and at all roads leading to the church, under the pretext of securing the Christians’ celebrations of the Holy Saturday and Easter, on Sunday.

However, the Israelis’ intensified procedures prevented Christians from reaching the church in Jerusalem, while the ones from the West Bank were denied access due to Israel’s refusal to issue them entry permits into Jerusalem.

According to al-Jazeera website, “For almost a decade, the Easter celebrations have been marked with clashes between local Christians and Israeli troops, who regularly prevent worshippers from accessing the religious sites.”

The Israeli authorities rarely issues entry permits for Palestinians either for work or for prayers at al-Aqsa Mosque in Jerusalem, which drives a large number of them to enter without permits.

To be noted, “UN Resolution 476 calls for “the protection and preservation of the unique spiritual and religious dimension of the Holy Places in the Jerusalem].” Similarly, the World Council of Church maintains that “Jerusalem must be an open, inclusive and shared city in terms] of sovereignty and citizenship.”

Moreover, “movement restrictions that impede access to religious institutions -and are not necessary for the maintenance of public order – infringe on the rights of the Palestinian population to freedom of religion and worship, according to article 46 of the Hague Regulations, article 58 of the Fourth Geneva Convention, article 75 of the First Additional Protocol IAP).”