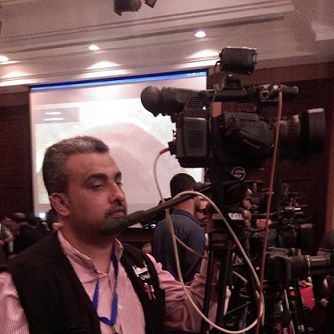 A Palestinian reporter, working for the Palestinian TV, was stabbed to death on Tuesday at dawn, near his home in the Nasr neighborhood in Gaza city. The reporter, Kamal Mohammad Abu Nahl, 40 years of age, was stabbed, with a sharp object, three times to the neck, throat and his lower back.

His brother, Omar Abu Nahl, told the Palestinian Center for Development & Media (MADA) that he received a phone call at dawn informing him that worshipers found his brother’s body near his home, following dawn prayers.

He added that his brother, who was visiting, left around 12:30 after midnight, and headed towards his own home, and that he was wearing a suit, but when his body was found he was wearing other clothes.

Omar said his brother’s wife was sleeping, but it appears he went home, changed his clothes, and headed out. The slain reporter is a married father of three children.

“My brother was a peaceful man; nobody hated him,” Omar stated, “He never had anonymity with anybody.”

The MADA center strongly condemned to the journalist’s murder, and demanded the authorities in Gaza to investigate the crime, and apprehend the assailants.