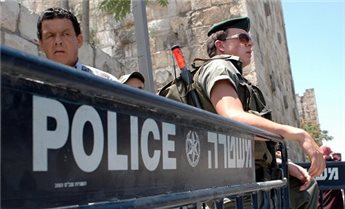 A Palestinian working in Israel was assaulted in his workplace during a dispute over a ‘broken mobile phone screen,’ his father said, calling for Israeli accountability for mistreatment of Palestinian workers.22-year-old Ahmad Nihad Abdullah, from Jenin, was working in a phone repair shop in Umm al-Fahm when he reportedly broke the screen of one a phone during the process of repair.

Abdullah’s father told Ma’an News Agency that the shop owner locked him inside of the store for four hours, ‘insanely’ assaulting him. After repeatedly hitting his son on the head, he threaten to shoot him.

Ahmad managed to call his father pleading for help, saying ‘they are going to kill me.’

The father contacted the Palestinian military liaison office, who in turn contacted their Israeli counterpart and managed to locate and free his son who returned to Jenin with serious bruises on his body and head.

He added that his son had all the necessary paperwork to work legally in Israel, and called on human rights organizations to expose the mistreatment of Palestinian employees in Israel.

Abdullah’s place of work Umm al-Fahm is located in the Haifa district of Israel, around 20 km northwest of the occupied West Bank town of Jenin. The town is home to nearly 50 thousand Palestinians, many of which are treated as second class citizens of Israel facing frequent discrimination.

Israeli attitudes of hostility and mistrust of Palestinian citizens of Israel have increased in recent years, as the minority is seen as a demographic threat and face socioeconomic differences from their Jewish counterparts, according to Israeli human rights organization Association for Civil Rights in Israel.